1. Viewing tracking history on a map

Now all MyChat mobile applications can send their GPS coordinates on the server. This is regulated by rights group, and can be disabled anytime.

In Windows application, if you have rights, you can view peoples' tracking history, the coordinates are placed on the map displaying approximate route according to points.

Set the time range for viewing coordinates; choose which device type to check (Android or iPhone). Also, it shows the last known point of the user's location and his route. 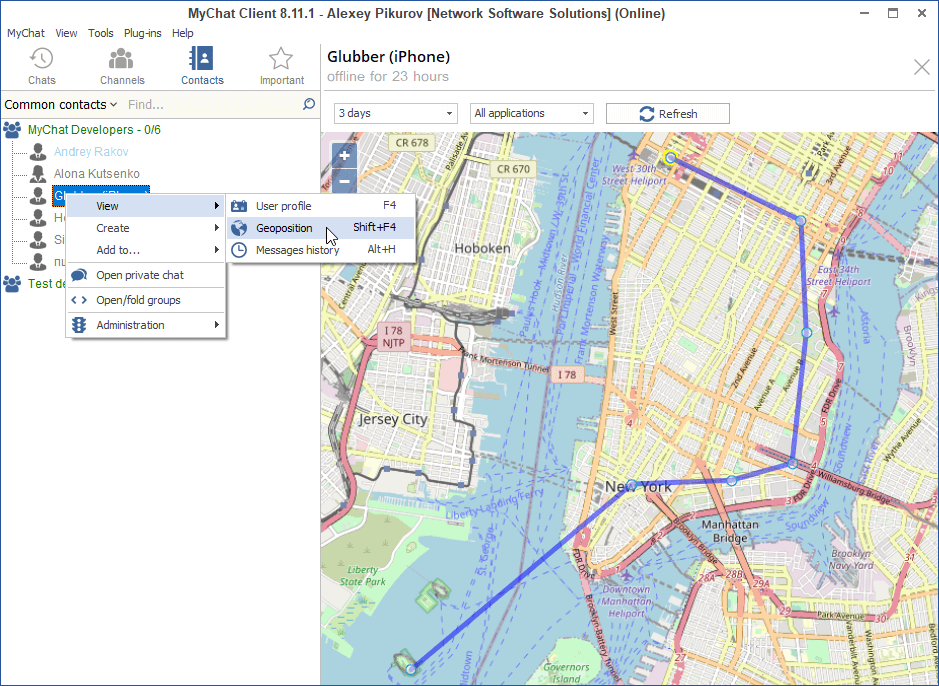 By default, the coordinates are sent when receiving incoming PUSH notifications, or by request, but not more than it spesified in the server's settings (by default, once in 15 minutes).

Also, in the scripting engine we added mGetGeoPosition to force request for longitude and latitude of a specific online device.

To display the map, you need to have an access to the internet and Windows 10 with the latest updates, because this feature uses a built-in engine Chrome-Edge for rendering the map.

Earlier, when a person was leaving the company, his account was blocked and manually deleted from all contact lists, groups, settings. But it was impossible to delete this account from certain lists, for example, personal contacts.

Now, it is possible to do in one click on a user in any place in the chat — in dialogues, contacts, conferences, provate dialogue (with rights allowing to fire users): 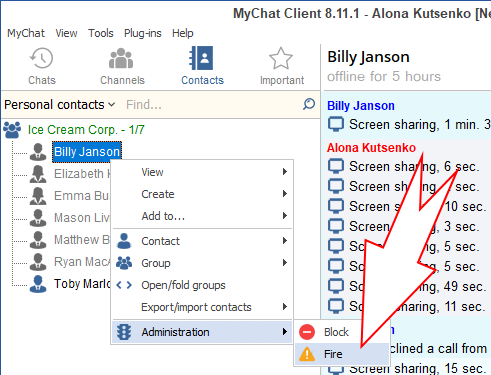 This option works bot on the server's Admin Panel, Users (several people at once), and in users' profiles, the section "Work": 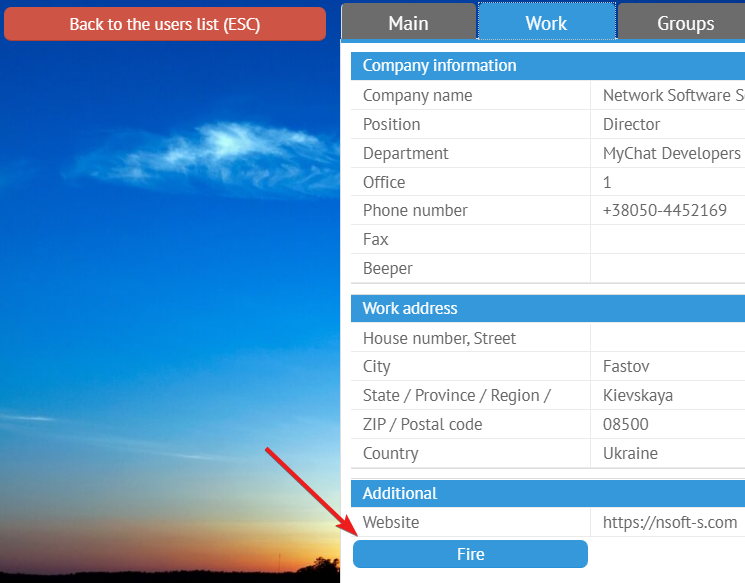 Settings templates on the server work better and more predictable . The point of this change: when after applying the set of settings on a user's computer a user changes something, then after a new connection the template will be applied again over the old one.

This feature helped to reach the maximum of flexibility.

When there is too long text in the private information field (ight panel, Ctrl + /), then it is shown instantly in the hint after pointing a mouse on the text. The hint disappears automatically after 3 seconds:

We have improved the announcement board for the Android application. Now there are highlights for links, phone numbers, emails. Added buttons "Select all", "Invert", "Clear" on the screen of creating broadcasts to select recipients more quickly.

MyChat Client
[+] (Android) added buttons "Select all", "Invert", "Clear" on the screen of creating broadcasts; [+]users' GPS tracking system (Android for now, iOS soon); [+] tool for firing users; it's enabled by Rights on the server; [*] Ctrl" + "3" in the chat window switches between common and personal contacts, if it's allowed by rights; [*] when there is too long text in the private information field, then it is shown instantly in the hint after pointing a mouse on the text. The hint disappears automatically after 3 seconds; [*] if changing some settings in the client after applying the server settings template, then after the next connection this template will be forcefully applied again; [*] (Android) added highlights for links, phone numbers, email on the Announcements board; [-] (Android) the applications shuts down on devices with 8.0 (API 26) when launching barcode scanner. Fixed; [-] when deleting own message in a conference, and then switching to another dialogue and return back to the first conference, an empty line is displayed in the window of common messages. Fixed; [-] (iOS) incoming notifications do not always display user's name. Fixed; [-] (Android) incoming notification does not process user gender correctly, always using the neutral gender in the read status line. Fixed; [-] (Android) when switching between different servers (without removing the application from the memory), and if there are users with the same UINs, then users' names displayed incorrectly. Fixed; [-] fixed error when downloading the server settings template when the client is offline during the process; [-] clicking on links on the announcements board (Ctrl+F12) does not work. Fixed; [-] when inserting formatted text (Alt+T), if between colored text blocks was spaces, they were ignored. Fixed; [-] sometimes, when a user is a conference moderator and was logged in from several devices at the same time, then he was colored in black instead of red in the conference user list. It affected the accessibility of the context menu for administration features. Fixed; [-] when adding the task to Kanban project (Alt+K) the deadline date sets up incorrectly. Fixed; [-] deleting messages in conferences works incorrectly even when checking the option "Delete for all". Messages are deleted anyway for all conference members. Fixed; [-] (macOS)(Linux)(WinAlternative) a call ends when switching to a dialogue with offline user. Fixed; [-] (macOS)(Linux)(WinAlternative) incorrect IP address is used for downloading files and viewing images when connecting to the alternative server address. Fixed; [-] (iOS) fixed issues, when the list of conferences remains empty; [-] (iOS) the list of conferences does not clear after switching accounts; [-] (Android) switching between the main and alternative server's address does not work. Fixed; [-] (iOS) incorrect calculating of a file's size. Fixed; [-] (iOS) sometimes the badge for unread dialogues does not work correctly on the navigation tabs. Fixed; MyChat Server
[+] technology for firing users that works on Admin Panel, User Management (you can choose several users at once), and in user profiles, the section "Work"; [+] console command "remove gpshistory" for clearing the history of a user's GPS tracking from the server's database; [+] (MSL) function mGetGeoPosition for requesting latitude and longitude of a user's online device (Android or iOS); [*] (Kanban) when pressing the plus button in the stage header, the task is added to this stage, and not to the first one; [*] the project identification is always written in the address bar for copying option; [*] (Kanban) all dates and time in project management converted into UTC; [*] cache system for rights groups to increase connection speed of a big number of users; [*] sometimes, when importing users from a domain, it was impossible to create a list of common contacts based on their department tree. Import procedure is improved; [-] (Kanban) when adding a new picture via task editing, this image does not display in the task card after saving. Fixed; [-] the "listening-port" parameter is ignored when configuring STUN/TURN servers for calls — the port is always 8888. Fixed; [-] when deleting a user from the server, his personal groups and entries from common and personal groups do not delete. Fixed; [-] when deleting a user from a server, then this account does not delete from a personal contact list, if it is there. Fixed; [-] the server does not return full information in a private window for registered users according to the list of constants (COMPUTER_NET_NAME, IP_ADDRESS, MAC_ADDRESS, ROLE, etc.). Fixed; [-] error in statuses of newly connected users. Sometime the list of online users contains disconnected accounts. Fixed; [-] (Admin) when managing users profiles, the tab "Work", and change the department for the account, then the server freezes. Fixed; [-] (MSL) function mGetUserGroupsListAsJSON works incorrectly and returns all common groups instead of those where a user is a member. Fixed.

5. How to update to the latest version?