1. What’s new in MyChat for Android?

There are a lot of changes after almost half a year of developing, so let’s talk about the most important things.

Now MyChat works well with the latest versions of Android, and now it uses the material design in the interface.

Welcome page is completely changed. There are only login and passwords fields. Now server connection management is located in the separate tool: 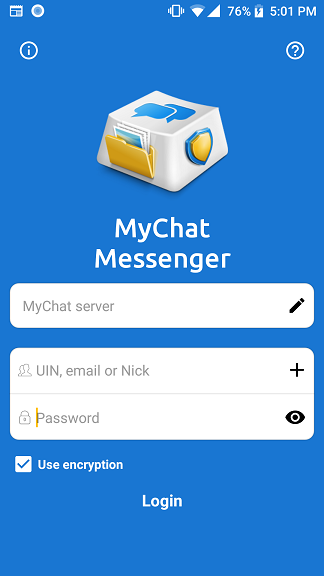 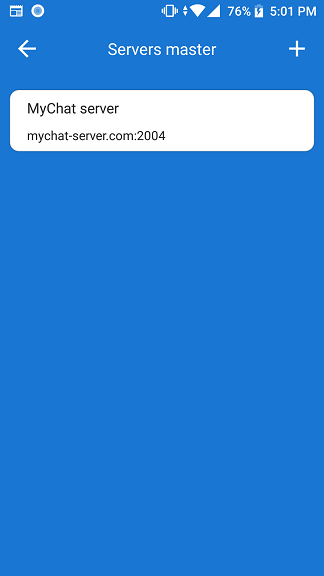 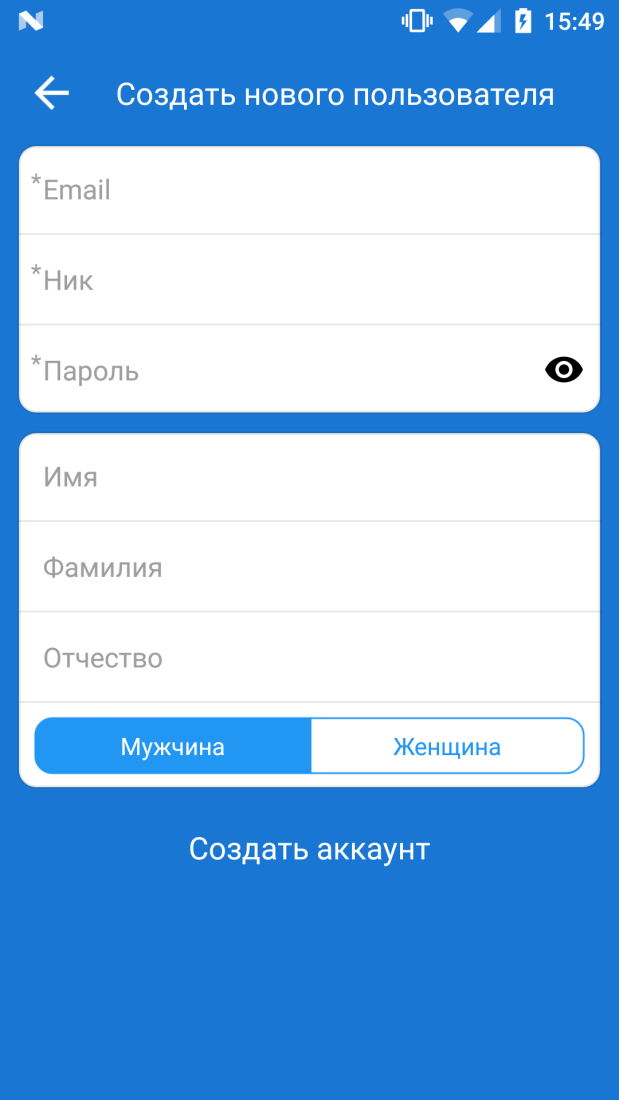 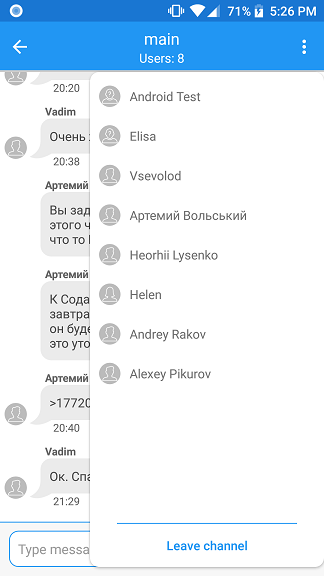 In the new version you can send files, images, self-geolocation and other contacts directly in the chat: 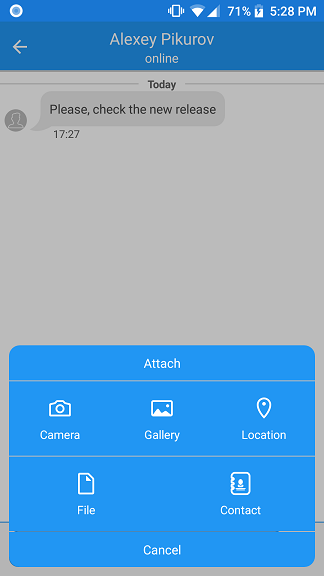 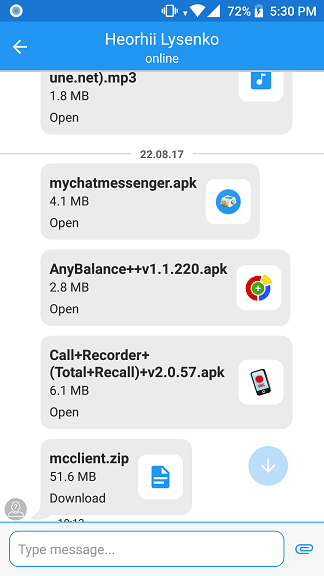 To continue, we’ve rework user profile window view. There are more information fields. You can add users to your personal contact list directly from here: 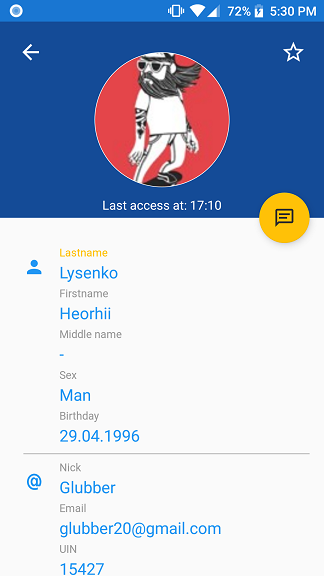 We’ve also changed the appearance of active chats: now next to the user’s icon you can see its status and numbers of unread messages: 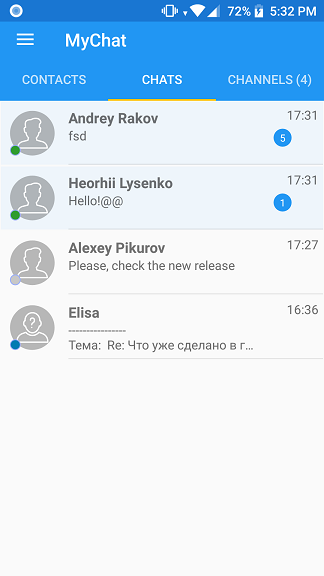 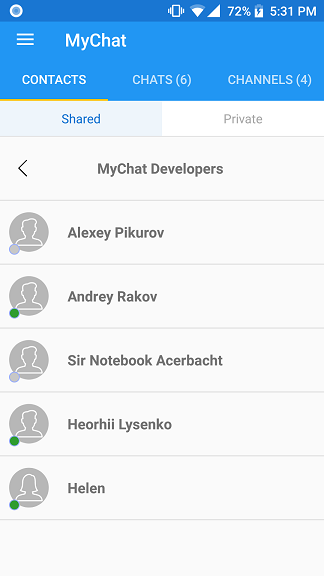 Now the technology of the direct files transferring at high speed has appeared in Mac and Linux versions of MyChat.

You cantransfer files directly at the physical speed of your network between Windows, Linux and Mac computers. Any quantity, any volume, even HD quality movies:

3. Spellchecking in Mac and Linux versions

MyChat has learned to underline typos and errors by wavy redcolor line and it also helps to fix them:

Step by step we are moving to a new database engine for MyChat – SQLite. We’ve made serious server database optimizations and here is the result: now the server starts about 3 times faster than before, and shuts down its work much faster.

Especially it is noticeable on servers with a big online activity (>400 peoples) and work in the Oracle Virtual Box virtual machines.

MyChat Client
[+] (Android) now the whole history is stored on the client and it won’t need to be downloaded from the server; [+] (Android) messages synchronization was added (in conferences and private chats); [+] (Android) an ability of sending files, images, location and contacts added; [+] (Android) notifications about new messages appear near the tab name. Also, numbers near chat signalize about new messages; [+] (Android) a new users’ registration form. There are only three required fields: e-mail, nickname and password; [+] (Mac) (Linux) spellchecking added; [+] you can specify Windows environment variables in the path settings for saving files; [*] (ConsoleMessenger) if the server has exhausted free connections, the program displays a message “The server has exceeded the maximum number of allowed connections” (ERROR LEVEL 22); [*] (Android) the list of conference users has been redesigned, now it is opened by clicking on the “function” button. In the future, other settings will be located in this menu; [*] (Android) the users’ profiles window has been changed. Now there are more fields with information. You can also add users to your personal contact list directly from the profile; [*] (Android) an appearance of the active chats has been changed: now next to the user’s icon you can see its status; [*] (Android) the chat login page is completely changed. There are only fields for entering the login and password. Now, all connection managing to servers is located in the separate tool. You can add servers, check whether they are connected and edit them; [*] server editing window: reaction on the “Esc” button —window closing, automatic transition to the password editing field when choosing “Use the password to connect to the server”; [*] to delete messages in the MyChat Client conference, all users had to have access to the server management. Rights requirements reduced; [*] the informative error message appears, if the file is uploads to the server (in a conference, private chat or by notification), but there is no physical access to the MyChat WEB server because of the firewall, antivirus or invalid network settings; [*] if there is no date of birth in the user’s profile window, instead of non-existing date and zodiac sign there is a message about it; [-] progress bar did not work in the new message creating window on the announcement board. Fixed; [-] (ConsoleMessenger) an error while multiple text processing in the message file and constant [CRLF] on the command line; [-] an error while domain user profile’s changing: a wrong nickname saving. Fixed; [-] it was impossible to edit server access password in the servers’ list. Fixed; [-] an error while updating from old versions (AD-authorization). Old messages in the local history was unavailable. Fixed; [-] the “restore” console command (Ctrl+ `) did not work correctly. Fixed; [-] if Messenger Style was active in the user’s rights group, an error has been occurring when exiting the program. Fixed; [-] wrong messages time stamp in conferences (not in history). Fixed; [-] if you use domain transparent authorization, MyChat Client shows the first connection wizard, which is not necessary to do. Fixed; [-] it was impossible to enter the password-protected conference, which contained non-English letters. Fixed; [-] (Android) domain authorization didn’t work with 6.4 server version. Fixed; MyChat Server
[+] (MSL) mSendBroadcast function for notifications sending; [*] (Admin) user name in the Active Directory importing tool saves specific authorized user in the WEB Admin Console; [*] (Admin) all fields are cleared when changing or creating new settings template; [*] the server database optimization: now the server starts approximately 3 times faster than before and also shuts down quicker too. Especially it’s noticeable on big servers or under Oracle Virtual Box; [*] firstly, if the domain user is successfully connected from the windows-client and then this account was deleted or re-created, the client stopped connection attempts. Fixed; [*] incorrect messages sending control by the Integration API added; [*] an updating process is very slow, if there are a large number of notifications in the history. Fixed; [-] (FTP) if the user tries to level up the current folder on the internal FTP server, the FTP client disconnects. Fixed; [-] an updating error from the older version: the GUI window unfolds to the full screen. Fixed; [-] (Admin) groups deleting didn’t work in auto-created conferences. Fixed; [-] there is a problem with the transparent AD-authorization, when security access password to the MyChat Server is used (ServerPassword parameter in the registry); [-] an error when the conference last user exits. Fixed.