May, 12th, 2016 was released the update of the intranet messenger called MyChat. The main feature of this version — is ability of integration with phpBB forum (ver 3.xx).

There is a new tool in the server WEB-console was added. It is located in the «Tools» — «Integration» section. There is only one item here: “phpBB 3”. This list will be filled up in the future.

Now you can set up your MyChat Server, so all new messages which appear on the phpBB forum, will automatically be sent into corporate chat. 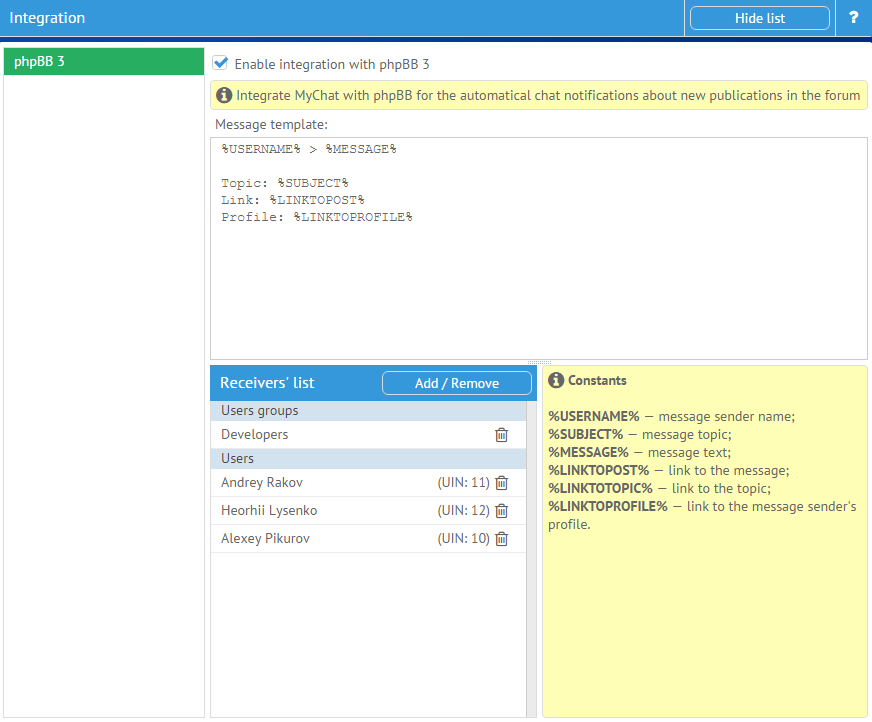 You can configure the message template, list of users, groups of users and conferences, where messages will be sent.


2. Speed-up of the server start

We are migrating to the new server database engine. Because of this we could increase the MyChat Server starting process in twice. Also the calculation of statistics was greatly improved. Especially this improvement is noticeable on servers with large numbers of registered users.


3. Help in the WEB-admin console

The buttons were added for a quick transition to the server help articles. The official help was fulfilled. As usual, the latest version is located on the site.

We made the additional logging of MyChat Client auto-updating process from MyChat Server. This is useful for network problems diagnostic.

For reliable audio and video calls the additional automatic settings in the TURN server were added. It was made for a good work behind NAT.

Now the client application files saving path option can include the system environment variables such as %APPDATA%, %USERPROFILE%, %HOMEDRIVE% and others.

This is useful, if these folders are setting up from the MyChat Server, but really they are located at the different places in user’s computers.

There was a new console LOGIN command created. It uses for the user changing, if the accounts manager call is prohibited by the rules. For example: the administrator needs to login into the corporate chat under his own account on the user’s computer.


[+] new LOGIN console command for the administrator was created. It uses for the user’s changing if the accounts manager call is prohibited by the rules;
[+] in the settings of files saving path you can use the system environment variables: %APPDATA%, %USERPROFILE%, %HOMEDRIVE% and others;

[-] PING console command has worked incorrect, if the computer don’t reboot for a long time. Fixed;
[-] errors, which were appeared during the program exit, were fixed;
[-] an error, which appeared after images sending via drag & drop, was fixed. If images with the same names were sending, these would be overwriting. Fixed;
[-] if the context menu was showed in the private conversation window or the conference window and then press Esc button, MyChat Client could “down” with the error. Fixed;
[-] the error of the settings template loading process from the server was fixed, if the template was applied while the client was offline;

[*] (Web admin) there was also added the color selection in the active password-protected conferences list. Now they are selected by the red color;
[*] MyChat Server start process was speed up more than twice. The short-term “freezes” during the process of user’s statistics calculating was removed;
[*] the command line key /zeroadmin for the restoring access to the server required the server restart. It was fixed and restart does not need anymore.
[*] (Web admin) additional automatic options in the TURN server were added. This gave an ability to work behind NAT;

[-] if the rule of administering MyChat Server through the console wasn’t enable, the restricted access to the WEB-admin interface would not work out. Fixed;
[-] the list of conferences exclusions where obscene filter was switched off, didn’t work. Fixed;
[-] errors, which were appeared during the program exit, were fixed;
[-] (Web admin) in the IP filters during address adding, it was got into the allowed list. Fixed;
[-] (Core) the error during the restoring of the lost connection to the non-auto created conference from the side of MyChat Client was fixed.